Free State Project: New Hampshire will continue to be the mecca for liberty lovers 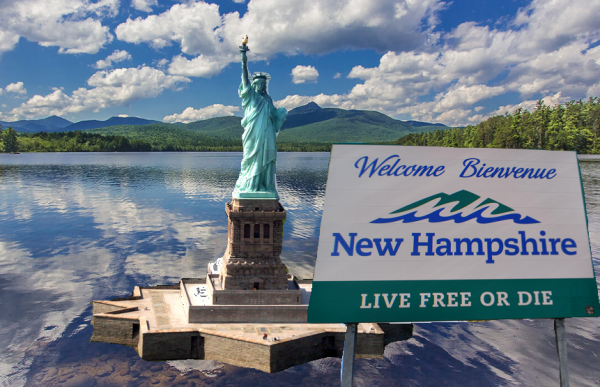 The Free State Project that intends to create a free state of New Hampshire in the United States, has been in existence for nearly 20 years.

The Free State Project that intends to create a free state of New Hampshire in the United States, has been in existence for nearly 20 years. However, to this day the organizers have managed to gather only about one quarter of the project supporters in New Hampshire. The original plan was to relocate an organized group of 20,000 people who were supposed to transform New Hampshire into a free state that would be based on the principles close to the concept of libertarianism. In an interview for our daily newspaper, the founder of the FSP project, Jason Sorens, suggested that even a smaller number of activists – about 6,000 people – will be sufficient in order to meet the original goal. Sorens’s project has so far moved less than 5,000 libertarians to New Hamhsire.

The aim of the Free State Project (FSP) was to move a total of at least 20,000 people from across the United States to New Hampshire and then use this activist community to influence politics and transform this small American state into a land of true freedom where government role will be limited exclusively to the protection of the right to life, liberty and private property of individuals.

According to the original plan, the target quota of the freedom-seeking “immigrants” was to be reached in February 2021.

Up to now (July 2020), more than 4,800 “free state” supporters have moved to New Hampshire, some of whom have already been elected as members of the local parliament. Most of these supporters – approximately 3,000 out of the 4,800 already “relocated” members – who signed up for the FSP are those who had already lived in the State of New Hampshire when the project had been launched.

The Free State Project was born in 2001, but the relocation of the US libertarian community to the State of New Hampshire did not officially begin until February 2016. However, many supporters of the Free State Project began moving immediately after the State of New Hampshire was chosen in 2003 for libertarian “resettlement” – or more precisely, for transformation.

As Jason Sorens, the founder of the FSP, stated, he originally believed that more people would be interested in moving. However, he considers the fact that about 150 people decide to move every year to be a good sign.

“We do not expect that flow to cease. New Hampshire will continue to be the mecca for liberty lovers from all over the world,” Sorens declared.

He also pointed out that New Hampshire had become substantially freer since Free State Project participants had begun to arrive – the taxes had been reduced, while the freedom of education and the freedom to start a business had increased and strengthened.

Sorens believes that less than 20,000 freedom-seeking movers – which was the original plan – will probably be sufficient in order to effectively increase freedoms and eventually achieve “Liberty in our lifetime”, the proclaimed motto of the project.

“We could have that kind of impact with about 6,000 activists, both movers and natives,” Sorens explained.

“We’re not that far away from that,” he added.

Sorens is aware of the fact that in the near future, the project will fail to meet the original goal of 20,000 freedom supporters who would physically move to New Hampshire.

“But we are continuing to sign up people who plan to move. If we sign up 30,000 people, perhaps we will get 5,000 actual movers,” Sorens revealed his future plans.

He pointed out that it was difficult for many supporters in the United States to move from their current homes to the State of New Hampshire. According to him, people are in close connection with their work and families and might also prefer a warmer climate rather than the one in New Hampshire.

“Moving to New Hampshire seems like a daunting task to them. But more and more people are considering it,” Sorens said.

“Most people who move to New Hampshire with the Free State Project are pleasantly surprised by how much freer and more effective they feel here than they were in their previous location,” Sorens stated.

When a question was raised whether he was planning to change the project strategy due to the small number of the project supporters who would be interested in moving to New Hampshire, he answered that something like this could happen.

“We may change the strategy once we pass the five-year deadline for the first 20,000 signers to move (in February 2021), but we will do so only to make liberty activists even more effective in securing a free society in New Hampshire,” the founder of the Free State Project concluded.

According to the project organizers, the movement that formed the basis of the FSP grew almost 20 years ago on the ideas of libertarianism – an ideology that is based on political and personal freedom and that allows only a minimal state intervention in society.

Nowadays, the State of New Hampshire has a total population of 1.34 million and is one of the smallest states in the United States (only 9 US states have less inhabitants). Even now, it is sometimes regarded as an American “tax haven” due to its low tax burden.

There is no “classic” personal income tax in New Hampshire, only dividend and investment tax. In addition, the corporate income tax is low and so are property taxes that are among the lowest in the United States.

Interview with JASON SORENS, founder of the Free State Project

FREE REPORTER: Your FREE STATE PROJECT (FSP) has been going on for almost 20 years. During that time, 4,800 people moved, ie. an average of about 240 people a year… How do you evaluate the results of the project after almost 20 years?

JASON SORENS: That 4800 number includes people who lived in New Hampshire already and signed up with the Free State Project. The actual number of movers is about 3000. We certainly hoped for more movers by now, but on the positive side, we continue to get about 150 movers a year, and we do not expect that flow to cease. New Hampshire will continue to be the mecca for liberty lovers from all over the world.

Do you still believe that the „free movers“ (regardless of whether there will be 5,000 or 20,000 persons) will ever succeed in fulfilling the slogan „Liberty in lifetime“ in the state of New Hampshire? When do you think a breakthrough will be achieved? That is, when people in New Hampshire start the path to a freer society, ie. a society that meets your minimum requirements for human freedom?

Each person must define for himself what counts as a „free society.“ New Hampshire has become substantially freer since Free State Project participants began to arrive, with lower taxes, more educational choice, fewer victimless crimes, and more freedom to start a business. We believe New Hampshire is the freest state in the U.S., and within a decade, its status as the freest state should become clear to everyone. As New Hampshire breaks away from the pack, more liberty lovers will see the advantages of moving to New Hampshire, and its advantages will only continue to grow.

Does the goal remain to achieve a real relocation of 20,000 supporters of freedom to the New Hampshire? Why was the number of 20 thousand people chosen and not 15 thousand or 30 thousand people…? Does it have any mathematical or mathematical-political reason?

I chose the number 20,000 because at the time I thought it was the maximum feasible number we could achieve. But shortly thereafter, I did some research finding that 20,000 activists in a new political movement would typically be able to win legislative majorities in states with populations up to about 2 million. In my view, the effectiveness of Free Staters in securing additional freedoms means that we need far fewer than 20,000 movers to achieve something approaching „liberty in our lifetime.“ By my personal conception of that idea, I have argued elsewhere on the basis of statistical evidence on the political impact of libertarian donors and volunteers that we could have that kind of impact with about 6,000 activists, both movers and natives. We’re not that far away from that.

Do you continue to believe that the goal of moving 20,000 „freedom people“ to NH will be achieved in the near future?

If not, do you plan to change the strategy or goals of the project?

We may change the strategy once we pass the five-year deadline for the first 20,000 signers to move (in February 2021), but we will do so only to make liberty activists even more effective in securing a free society in New Hampshire.

In your opinion, isn’t such a weak interest in the project (ie. moving to New Hampshire in order to transform it into a free state) proof that the basic idea – freedom, free society – is not attractive or important enough for the people of the USA?

Most people don’t live their lives according to their professed principles. At least some libertarians are trying to do so! Moving can be hard for many people, and there are all sorts of reasons why people do not move to New Hampshire. We’re in this for the long run. New Hampshire will continue to become freer, and as that happens, more and more liberty lovers will see the difficulties of a move as being worthwhile for themselves personally.

Since people continue to move to New Hampshire in a steady stream, we believe that there are many thousands more who would move here if they had the chance.

Can’t the real reason for the weak interest in moving to NH be that „freedom fans“ in the United States do not believe in basic idea that moving to one state can turn this state into a free one?

I don’t think that’s the real reason. People are attached to jobs, families, and perhaps warm climates. Moving to New Hampshire seems like a daunting task to them. But more and more people are considering it.

Would you consider the fact that you have encouraged thousands of people to move to a state that is objectively freer than other states in the United States to be a sufficient success?

Merely encouraging people to move is not a success. But we are already successful in increasing the real freedom that the people of New Hampshire enjoy.

Was the creation of a community of free-thinking Americans in New Hamphsire an end in itself, regardless of achieving the main proclaimed goal, that of transforming NH into a freer state?

It has been a very desirable side effect of the movement. By moving to New Hampshire, you can now join a social network of likeminded people who respect your rights and are willing to help you achieve your political and philosophical goals. That’s a very empowering feeling. Most people who move to New Hampshire with the Free State Project are pleasantly surprised by how much freer and more effective they feel here than they were in their previous location.

MORE ABOUT IMMIGRATION TO NEW HAMPSHIRE FROM OVERSEAS READ HERE:

Immigrate to New Hampshire from Overseas