Floating Islands: The project of a free floating city on artificial islands near Tahiti fails

The project of a free floating “city” on artificial islands (Floating Islands Project) that would be independent of states and governments, failed. The organizers of the project, the American Seasteading Institute, or more precisely its developer organization Blue Frontiers, planned to build an independent floating city at sea in Polynesia near the island of Tahiti. According to the official statement of the organizers, the project was not completed and was postponed indefinitely after several years of preparations.

The Seasteading Intitute was founded in 2008 by PayPal founder Peter Thiel and Patri Friedman who is an activist, software engineer and political-economic philosopher. He is also the grandson of Nobel Prize-winning economist Milton Friedman.

The „Floating Island Project“ started in Polynesia in 2017, when the Seasteading Institute signed a Memorandum of Understanding with the government of French Polynesia, which was supposed to result in the construction of a floating city on artificial islands near the island of Tahiti. To develop the project, the institute formed a special developer organization called Blue Frontiers.

According to the original plans, the first prototype of an independent floating city based on the principles of economic and political freedom was to be built on an artificial island near Tahiti in French Polynesia by 2021. However, this did not happen and neither is it going to happen in the future.

The institute explains that the Floating Islands Project was stopped due to the pre-election situation in French Polynesia, where a small group of people allegedly spread disinformation about the project in order to discredit President of French Polynesia Édouard Fritch.

“The political fighting did cause the Floating Island Project to be postponed indefinitely,” the institute explained.

„We at the Seasteading Institute certainly know how risky it is to place one’s hope in the political process,” it added.

Even though the project was not completed, the institute allegedly gained many supporters and connections who are now working on related seasteading projects in other locations.

As far as other plans of the Seasteading Institute are concerned, the director of development Carly Jackson said that as a small nonprofit, they didn’t intend to design and build artificial island systems themselves.

“Our role has traditionally been as researchers of general technology and cheerleaders for the big picture vision,” Johnson stated.

According to her statement, the institute is now trying to introduce new audiences to the concept of seasteading by creating videos and presenting at conferences.

“We are also working on negotiating with different countries to establish a SeaZone, which is a special economic zone where seasteading companies could build their platforms,” Jackson specified.

“We have inspired entrepreneurs all over the world to make seasteading happen in the next few years,” she added.

As for the specific Floating Islands Project in Polynesia, the institute has no other plans for it any longer. Jackson advised to contact the organization Blue Frontiers regarding any further questions about the reasons for the original project failure.

The developer organization, however, does not communicate with the public and has not been answering questions for a long time. Blue Frontiers‘ last official response is from 2018, when it said in reaction to an article that its plans were not “sunk”.

At that time, it explained that it was working with partners in French Polynesia on the next steps for the project, which may be off the coast of any number of the 118 islands in the region.

No information is yet known about any real progress made by Blue Frontiers in establishing independent cities built on artificial islands.

This raises a question whether the very concept of „seasteading“ (“sea homesteading”) or the basic idea of creating state-independent communities on artificial islands at sea is realistic. And whether it would not be easier and cheaper to use the already existing natural islands in order to create new autonomous communities independent of the state.

Despite that, the director at the Seasteading Institute Jackson prefers the concept of creating new artificial islands at sea. In her words, society living on a floating (artificial) island will allow for a much greater variety in governance structures.

“Existing islands, deserted or not, are still subject to the existing, land-based governance structures. Floating islands also offer many opportunities for restoring the environment through innovative aquaculture and clean energy generation,” Jackson added. 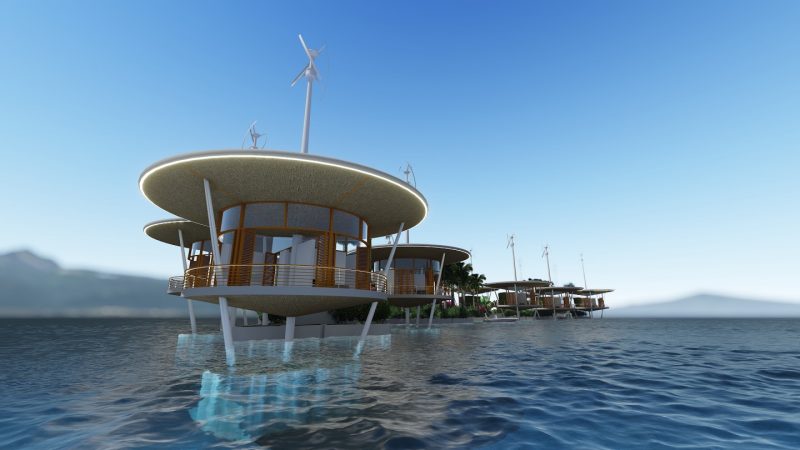 The cost of building the first floating city, or more precisely a „floating village“ near Tahiti (the first island was designed for 300 inhabitants) was estimated at USD 60 million.

The goal of the Floating Islands Project was to create „ecological floating platforms that would give answers to challenges such as rising sea level and sustainable development“.

These floating platforms were to become the basis for residential homes, offices and infrastructure to serve „living communities“ and develop new ways of coexistence.

Moreover, Blue Frontiers designed a floating island that would be large enough for a number of buildings serving as a hotel, restaurants, homes and offices. The pilot project expected that this island would be able to accommodate a total of 300 inhabitants.

The first floating island was to become the core which other floating „cities“ were to join.

The Seasteading Institute originally considered building independent floating cities on the high seas, i.e. in international waters. In such a case, the project would not have to seek the approval of politicians. Additionally, it would not have to negotiate with governments over a compromise framework for political and economic conditions of operation. However, the institute later abandoned this idea. (lum)